Kickass, the doorstop dog, says if the keeper kept a diary—which would not be a good idea, the Tuesday entry might read something like: Replaced tattered cloth shoestrings with new leather ones, voted at the Village Hall, failed yet again to fix whatever the hell is wrong with the printer, stopped at a St. Vincent store and bought an Eskimo knife which he will never use, had a tavern hamburger with a slice of raw along with cold Spotted Cow while watching the end of a Brewer’s win, thought about trying to write on one of a half dozen unfinished projects but watered the tomato plants instead, listened to a Bluegrass band at a concert in the Village park with family members and friends while snacking on cheese and crackers, went to bed with Rachel Maddow and a small black dog named Boo.

It was a great day, but hardly worthy of documentation in a diary, except for those new shoestrings, of course.

Shoestrings seem to be important to the keeper, which is a difficult thing for a dog to understand 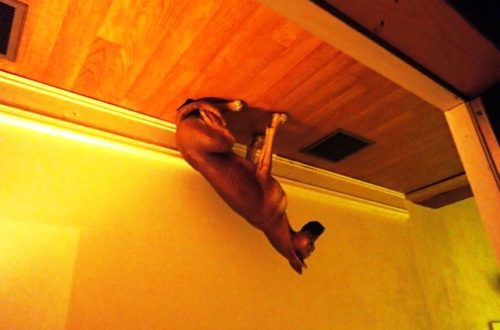