Kickass, the doorstop dog, assists the keeper in memorializing R. B. (Rolland) Curtis, Wisconsin’s most decorated WW I soldier who was a mentor of sorts when the keeper was sorting through the debris of pending adulthood in Barron County.

On a fishing excursion, R.B. told the story of his unit’s little mascot dog running about on a battlefield and biting at the puffs of dust kicked up where bullets hit.  R.B. laughed in the telling, and he left an image for the keeper to carry through life—of a dog reacting to battlefield bullets in the only way it knew.  The image endures, as does the echoing of R.B.’s ready laughter over the absurdities of life, even when it included early versions of killing fields.

R.B. served briefly as county sheriff, but he said the job required too much exposure to things that couldn’t be laughed off.

In a barroom demonstration of amazing agility, R.B. taught the keeper the folly of “taking another man’s bet,” and then he returned the keeper’s five bucks later when the point had been made.

So, the keeper recalls R.B. laughing at the keeper’s naivete, and at the bullet-biting dog; and the memory of that laughter seems oddly appropriate on this Memorial Day. 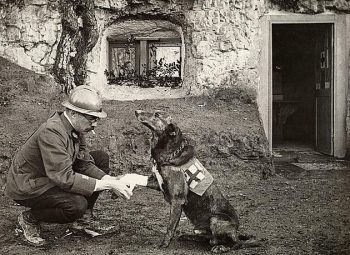